Now Available on DVD and Blu-ray 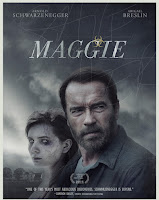 It’s a little bit bizarre seeing legendary action hero Arnold Schwarzenegger scale back his larger-than-life acting persona.  Known primarily for his action beats and his poor attempts at comedy in the previous century, one would think that a Schwarzenegger zombie flick would be a more gun-heavy, mindless affair.  And yet, what we have here is a film much more concerned with providing a simple subtextual tale than it is about killing zombies.

Maggie takes place in the aftermath of a zombie apocalypse, where the government has mostly contained the zombie threat, but some stragglers still manage to bite and infect new victims.  Schwarzenegger plays Wade, a Midwestern farmer whose daughter Maggie (Abigail Breslin) is caught in the city after curfew when a zombie bites her, leaving her to gradually transform into one of the monsters.  Wade brings her home, much to the fear and disdain of Maggie’s stepmother, and treats her as the virus begins to destroy her body and corrupt her mind.

As any aficionado of zombie films will tell you, zombies are rarely representational of just flesh-eating ghouls, but are generally used to convey human experiences through supernatural allegory.  In Maggie’s case, terminal illness is the go-to human condition, as Wade helplessly watches Maggie fall victim to her disease; all those muscles can do nothing to combat the virus in Maggie's veins, so he must cope with a decision to either turn her in for quarantine or end her suffering himself.  This carries an unfortunate implication of euthanasia advocacy if you take the allegory to its furthest extremes, but this is mitigated somewhat by Maggie’s insistence that it is necessary to save her and others.  Speaking of which, Breslin plays a fantastic Maggie, whose subtle transformation is full of fear at what she’s becoming, yet a distinct humanity that she doesn’t so much cling to as exude naturally as it is slowly chipped away.

Yet all these trappings tend to feel a little hollow if you start looking too closely.  As I try to come up with character traits to describe Wade and Maggie, I find myself mostly at a loss, as their characters seem to exist solely for their place in the plot.  They don’t feel like real people, but rather puppets acting out a simple story with broadly drawn archetypes.  This isn’t necessarily a bad thing, as the point of the film is not to be a character study but an allegory, yet it feels like a wasted opportunity, particularly given how subdued stoicism is new acting territory for Schwarzenegger, and Breslin doesn’t seem to have much opportunity to flex her acting muscles these days.

All in all, though, I found that I liked Maggie, even if it was a bit disappointing in some respects.  If it had insisted on stretching its runtime beyond ninety minutes, I might have felt differently, but as an exercise in light zombie parable, it’s not too shabby.

Is Arnold Schwarzenegger too old to keep up the action shenanigans of his youth?  Is this a good direction for his career to go?  Leave your thoughts in the comments below.
Posted by Unknown at 9:40 AM

Hey all! I'm Leigh Monson, your Pretentious Best Friend, and this is the one stop shop to find all my written works available online. I primarily write for Substream Magazine, but don't be surprised to see a few other publications pop up as well, or perhaps a quick editorial written here if I fancy it. If you have a movie that you'd like to see reviewed or an idea for an editorial, send me an email at leigh@substreammagazine.com. You can also reach me via Facebook and Twitter. I'll be happy to dole out some tough love for you.