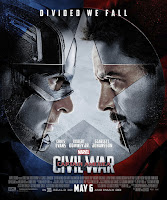 Wow, guys.  Just… wow.  Normally, I try to come up with a clever opening paragraph that ties a film into a larger cultural narrative or a context that gives you some perspective on why I liked or didn’t like a film.  But if you’ve read my previous reviews, you know I unapologetically love Marvel’s Cinematic Universe, not out of any fanboy loyalty but because they are well-made films that consistently build upon one another to achieve with continuity-driven storytelling that no other franchise has realized in the history of cinema.  There have been hiccups in the grand experiment, but overall the films are pretty great.  You already know this.  But here’s what I have to tell you: Captain America: Civil War is the culmination of years of narrative and character development into what is easily the best film Marvel has made yet.

The film juggles characters and their respective arcs like no other film I can think of offhand, in a manner that puts Age of Ultron to shame.  The story is simultaneously about the redemption of Bucky Barnes, the relationship between Vision and Scarlet Witch, newcomer T’Challa/Black Panther’s quest to avenge a fallen loved one, and, of course, the ideological conflict between Captain America and Iron Man over whether their powers should be subject to government oversight.  It’s astounding that the film manages to take an immense cast of roughly a dozen characters and give them each something entertaining to do, all while telling an engaging story that makes the long 150 minute runtime breeze by like nothing.

This is in large part because the film takes its time with its vital character moments, providing pathos for not only the conflicts between individual characters but the larger ideological issues at play.  Rarely does an action film take such care to show the collateral damage of its action setpieces, and here Tony Stark’s desire to achieve guilt-motivated accountability is conveyed as a completely rational and legitimate argument, even in the face of the film’s obvious bent toward Steve Rogers’s concern that bureaucratic red tape would make them less effective saviors.  These scenes play powerfully, with real investment and emotion grounding the performances of these larger-than-life figures, both in the Tony/Steve relationship and those of the supporting cast.  These aren’t gods among humans; they’re people just trying to do the right thing, and that makes the rift in their friendships all the more troubling.

But don’t go in thinking that the film is entirely dramatic and devoid of action spectacle, because directors Anthony and Joe Russo have assembled (…heh) some of the greatest superhero fight scenes ever put to film.  Early action beats are frantic and effective, pitting heroes against each other in fun and creative ways, but the real kicker is the inevitable big fight where all of the heroes duke it out against one another in a collective brawl.  I won’t spoil the better moments, but prepare to marvel (…heh, again) at just the number of ways that heroes can organically team up, butt heads, get taken down, and re-enter the fray.  It’s simply mind blowing how all this was achieved without making the action too frenetic or indecipherable, and on a small enough scale that civilian casualties aren’t ever a concern, keeping the heroic nature of every character intact.

I could go on about how Tom Holland is the best Spider-man to ever grace the big screen, how the film manages to retain a sense of wit and charm even against the bleakest of backdrops, or how the film’s climax is both striking in its emotional weight and entirely cathartic as the culmination of the central conflict.  However, anything else I have to say would both do injustice to seeing it firsthand and likely verge directly into spoiler territory.  This is, in short, an amazing movie, the kind that effectively translates comic book sensibilities to the big screen without compromise, to the point where I have an incredibly hard time imagining how Marvel could go anywhere but down from here.  I’m blown away, folks.  This movie is just.  That.  Good.
Posted by Unknown at 10:14 AM

Hey all! I'm Leigh Monson, your Pretentious Best Friend, and this is the one stop shop to find all my written works available online. I primarily write for Substream Magazine, but don't be surprised to see a few other publications pop up as well, or perhaps a quick editorial written here if I fancy it. If you have a movie that you'd like to see reviewed or an idea for an editorial, send me an email at leigh@substreammagazine.com. You can also reach me via Facebook and Twitter. I'll be happy to dole out some tough love for you.